;You Dropped Food on the Floor

>I came across this image today – brilliant. Made me giggle. Found it on the SF Weekly blog.

>Now this looks better! Like how a normal person sleeps, despite working until 9:30 and watching CSI until after 11pm. 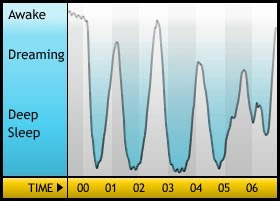 >I just finished reading a book called “Errornomics – Why we make mistakes and what we can do to avoid them” by Joseph T. Hallinan. Hallinan is a Pulitzer Price Winner and I wonder if he knows that he shares his surname with the cook in The Shining.

The book was good. Some interesting information. Like all books that deal with micro-economics (and moreso those that deal with people’s brains) you have to be wary of their bias towards, you know… proving their point. Still, interesting.

There was something at the end of the book that I found particularly interesting. I just completely killed the spine of the book (iz mine, I pwn it, I can haz spine bust if I want) in order to share with you guys the last bit of the book. It is paraphrased from pages 220 and 221:

“The currency of life isn’t money, it’s time. When people make major life changes, like moving ot a new city or retiring from work, one of their biggest mistakes is not changing the way they use their time.

It takes determination and discipline to re-craft a life — which is why … so many retired people end up going back to work. The mistake they make is that they spend their time doing the same old things they’ve always done and not the new things they thought they were going to do. [I]n the end … it’s not where you live that makes you happy; it’s how you use your time.”

I think I’ll blog about this more later. I’m thinking about this right now though. About time. You can always earn more money, but time is in limited supply. Am I doing the most with what I have?

>Guess how stressful my Monday was?  I couldn’t relax, I couldn’t shut down my mind.

>Sunday, bloody Sunday! Why can I never sleep well on a Sunday night? That’s a mighty irregular graph, yo.

>What Does China Censor Online?

>Lovely graphic from Information is Beautiful – one of my favourite websites. Definitely go check it out.

This was a much deeper sleep than last night. It takes me so long to get there though! And why am I waking up around 5am? Maybe I need less sleep than I think..

>Is Boris The Bestest Mayor In The World?

Boris Johnson, he of 100 achievements, has made a rather long shortlist in a competition to find the best Mayor on the planet. BJ joins over 40 other civic leaders vying for the 2010 World Mayor Prize. The list of candidates is based on public nomination, and remains open until April. The prize, organised by international think tank City Mayors honours mayors with ‘the vision, passion and skills to make their cities incredible places to live in, work in and visit’. The Blond’s nomination is for achievement in international relations (getting noticed by the Governator and masterful flagmanship at the Beijing Olympics?), environment (taking a fully clothed dip in a nature reserve?), and transport (avoiding a flying car and cycling to the aid of a mugged pedestrian?). Don’t it make you proud?

I freaking love Mayor Bojo.  Look at that hair! I remember reading in one of the free (and now defunct) papers that Bojo supports a two drink lunch. AWESOME.  And his appearances on Have I Got News For You? MORE AWESOME. Seriously.  Entertainment and politics together at last. I think every city should have their own clown in city hall.

>(from The Londonist, a very rad site)

Economics lecturer Peter Backus has used a famous equation for enumerating alien civilisations to calculate his chances of finding the perfect girlfriend. They’re not good. Despite his hedonistic surname, Mr Backus can only expect to find 26 women in the whole of London who match up to his exacting standards. Let’s examine his working.

His calculation is based on the Drake Equation, which famously estimates the number of contactable civilisations in our galaxy:

(See his original ‘paper’ for values of these terms, and context.)
His conclusion?
That on any given night out in London, there is a 0.0014% chance that he’ll meet an appropriate partner, even less if he factors in vagaries such as whether they’ll get on or not. Now, there are any number of reasons why his calculation is shaky (for example, it assumes random mingling, whereas he’s more likely to attend events with similar kinds of people). But the paper is fun to read through for anyone with nerdish tendencies. And it’s refreshing to see a ‘boffin creates formula’ story that isn’t tied into an advertising campaign for some related product.